The Gentle Indifference of the World

Love will always be above life, fear, death and money.

After her father's untimely death, Saltanat is forced to trade her idyllic countryside life for the cruel city. She has to find money to pay off the large family debt that her father left behind, in order to save her mother from jail. Friends since their village childhood, her loyal, but penniless admirer Kuandyk follows her just to make sure his sweetheart is safe. Saltanat's uncle introduces her to a possible groom, who promises to pay off her family's debts. But Saltanat's hopes are dashed, when she discovers that the men in this city don't keep their word. When Kuandyk tries to help Saltanat get the money through other ways, he ends up finding himself in more trouble than he bargained for. Although life keeps dealing them bad hands, Saltanat and Kuandyk never give up, no matter what the odds. 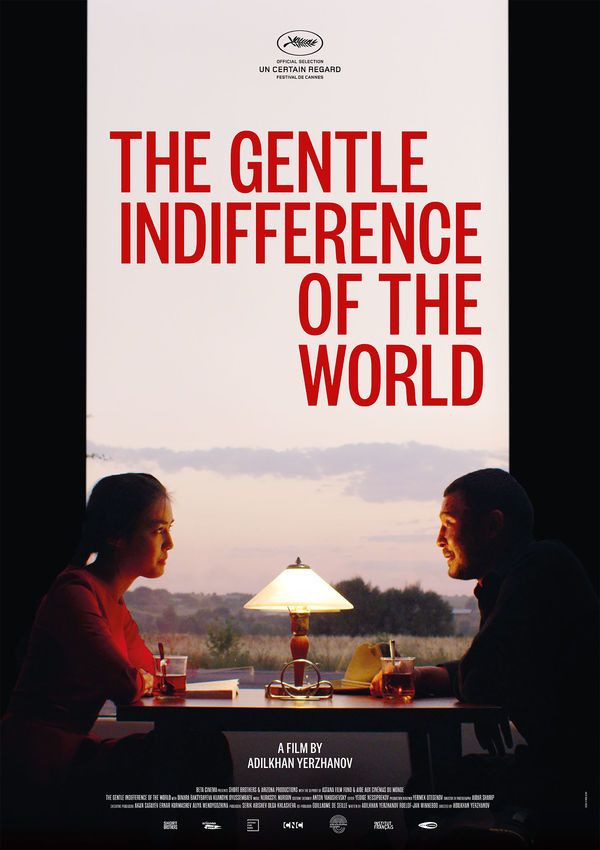 *****
"It's so rare that a movie captures the simultaneous struggle and beauty of the human condition so perfectly. Universally profound, visually stunning and moving to the core, The Gentle Indifference of the World is a an absolute masterpiece."
"Yerzhanov is surely one of the most incredible talents of our era. This The Gentle Indifference of the World is stunning in every sense."
THE UPCOMING

****
"We discover a current of love and romance coursing through The Gentle Indifference of the World that moves us. How this is teased out is delicate and artfully done, with the spectre of Camus always looming."
BRIEFTAKE

"Yerzhanov has crafted a distinctive cinema of poverty that's serious in its themes and playful in its design. His slyly humorous, stylized minimalism, the miserablism of his characters and their laconic, poker-faced acting style all recall the early films of Aki Kaurismaki."
VARIETY

"Composed of beautiful static shots, The Gentle Indifference of the World is a highly stylised and offbeat work which stands out among a crowd of full-length films in which modernity abounds."
"Clearly composed with great care and attention, it confirms the strong artistic identity of this director, who has firmly anchored himself in 7th art traditions."
CINEUROPA

“This latest venture has all the set-dressings of a modern day neo-noir, regarding a smitten paramour who descends into hell to save his object of desire. At the same time, there's much to Gentle Indifference regarding Kuandyk's subplot which is equally reminiscent of Sergei Dvortsevoy's celebrated 2008 film Tulpan”
ION CINEMA

“Packed with a droll sense of humour, a gorgeous spectrum of literary and cinematic influences, and an inquisitive eye for human relationships, Yerzhanov's new film signals a voice to watch in world cinema.”
CINEMA BIOGRAPHER