An epic future portrait of Russia's society and the last remaining fears and desires of the rich and powerful.

Russia, 2020. The country is thriving, prosperity spreading. Stability prevails. Yet the elite is unhappy. A nameless anguish grips the wealthy, influential top levels of society. Viktor, for example, the Minister of Natural Resources, his wife Zoya, a bored housewife, and her brother Mitya, a TV celebrity. What plagues them is the steady decline of their youth, their loss of dynamism, sexual appetite, lust for life. But one day they learn that they can indeed regain their powers and retain their youthful looks: in the Altai Mountains, near the Mongolian border, lies an abandoned Soviet-era secret facility called “the Target,” a kind of gigantic dish where the Soviets studied cosmic radiation. It is believed that anyone who spends time in the center of this dish returns rejuvenated, vigorous and fresh. The group is joined by Nikolay, a grim military man who controls the new Guanzhou-Paris superhighway, and, later, by Anna, a sensitive author, as well as Taya, a native of the Target region who looks decades younger than she is. When the group returns to Moscow, they truly do feel happier and more youthful. But the energies they have absorbed also lead to uncontrollable excesses, to outbursts of violence, to selfdestructive actions. Now they got the powers of youth - but at what price? 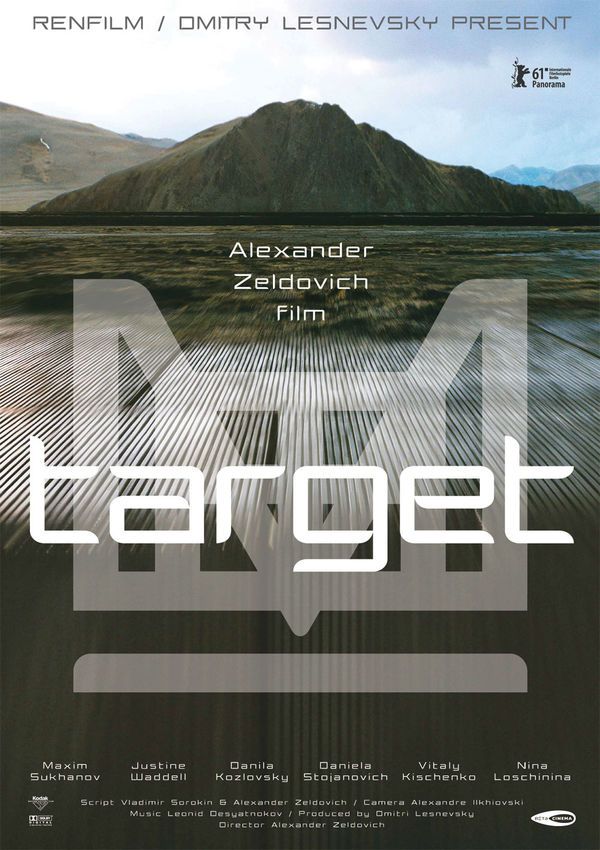 TARGET has some of the enigmatic Solaris magic, mixed with FX-era glitz, a combination it carries off with breathtaking flair. The film deserves to acquire cult status at the very least, and while its more cerebral thrust might deter the straight sci-fi market, intelligent marketing could make it a niche hit with discerning audiences open to art-house/genre crossover.
SCREEN INTERNATIONAL

“…a massively ambitious, visually lavish sci-fi fantasy from Russia. TARGET has it all – snazzy future gizmos, TV gameshow satire, motorway action, weird sex, lashings of existential philosophy and the odd poem by Mikhail Lermontov. It's rather like Minority Report remade in the spirit of Tarkovsky, with some J G Ballard on the side. Nutty, expansive and downright visionary, TARGET deserves to be the cult sci-fi hit of the next decade.”
THE INDEPENDENT UK

“An extraordinary, flamboyant, hugely ambitious chunk of dystopian futurism. A sumptuously-designed, constantly surprising piece, TARGET uses the science-fiction genre rather in the way that Alphaville, Stalker and Fahrenheit 451 did, to philosophical effect – although in this case the production values are on a much more sumptuous, Spielbergian / Kubrickian level. Some of the social satire, notably some Fellini-style TV sequences, is heavy-handed, but TARGET is distinctive in being at once modernistically sleek and traditionally Russian; along with some Solaris-style oases of ruralism, this is one of those films where characters intermittently recite Lermontov poems to each other. Part state-of-the-nation comment, part disquisition on good, evil, mortality and desire, and wholly a genre cult attraction extraordinaire, Target is a fabulously imaginative work”
THE BRITISH FILM INSTITUTE